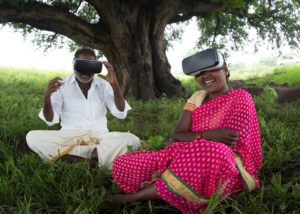 ANIMAL EQUALITY by Jose Valle
CHASING CORAL by Jeff Orlowski
HOW YOU SEE ME by Kathryn Harriman
INFERNO VR by Holly Wollard and Stephanie Stretton
LIFELINE by Victor Michelot
POTATO DREAMS by Wes Hurley & Nathan M. Miller
MELTING ICE by Danfung Dennis
NOTES TO MY FATHER by Jayisha Patel – WINNER
OPEN BLUE COBIA by Ulrike Futschik
OUT OF THE BLUE by Sophie Ansel
TRACES by Gabriela Arp
TZINA: SYMPHONY OF LIVING by Shirin Anlen
VIRTUALLY CAYMAN by Joergen Geerds
WOMEN ON THE MOVE by Shannon Carroll

This competition is dedicated to showcasing diverse and innovative work in the VR space. Experiences include works made by Women, People of Color and LGTBQ.

This program is generously supported by Samsung & Oculus.

Illya Szilak is a writer, artist, independent curator and physician. With her long-time collaborator Cyril Tsiboulski (Cloudred Studio) she creates interactive narratives that incorporate historical and documentary media. Reconstructing Mayakovsky and Queerskins are both included in The Electronic Literature Collection and have been taught as examples of innovative narrative and experimental game at the university level. Her latest projects Atomic Vacation and Queerskins: a love story, experiences for virtual reality, are forthcoming. An Oculus Launchpad fellow, she has received grants for her VR work from The Sundance Institute/Arcus Foundation and most recently from The Tribeca Film Institute and The John D. and Catherine T. MacArthur Foundation.

Caitlin Fisher directs the Augmented Reality Lab at York University where she held the Canada Research Chair in Digital Culture for the past decade. A 2013 Fulbright Chair, Fisher is the recipient of many international awards for digital storytelling including the Electronic Literature Organization Award for Fiction and the Vinaròs Prize for AR poetry. She serves on the international Board of Directors for both the Electronic Literature Organization and HASTAC, the Humanities, Arts, Science, Alliance and Collaboratory. Currently she is engaged in a four year SSHRC-funded research project exploring the potential of long-form interactive narrative in virtual and augmented reality.

Javier Molina is an engineer, actor and media artist based in NYC, working with Virtual Reality, Motion Capture, Interactive Installations, Performance Art and Experimental Film. He studied Telecommunications Engineering at the Army Polytechnic School in Quito, Ecuador and at the NYU School of Engineering along with a minor in acting at Uta Hagen’s HB Studio. He currently works at NYU MAGNET as faculty researching VR and AR technologies and teaching Motion Capture Workflow for Virtual Reality.

Kristin Gutekunst is an Executive Producer for the UN SDG Action Campaign, responsible for curating and implementing the campaign’s storytelling portfolio – including UN Virtual Reality, new media and immersive content. Kristin has extensive experience in campaigning for development, particularly with grassroots mobilization, youth engagement, innovative communications, and the creation of high-level advocacy strategies. Prior to this she worked on MY World 2015, the UN’s global survey for a better world, with UNICEF’s global HIV/AIDS Campaign and as a teacher in multiple countries. She has a Masters in Development, Management and Policy from Georgetown University and the University of San Martin in Buenos Aires, and a BA in English and Spanish Literature from Fordham University, Rose Hill in New York City.

Neil Padukone is the Director of New Initiatives at the NYC Mayor’s Office of Media and Entertainment, managing the City of New York’s relationships with the music, digital media, and advertising industries, including the very first publicly funded virtual reality/augmented reality laboratory in the United States.

A former Speechwriter to the President of the New York City Economic Development Corporation, Neil is the author of Beyond South Asia: India’s Strategic Evolution and the Reintegration of the Subcontinent, and has an MPA from the Harvard University Kennedy School of Government, where he was a fellow at the Women and Public Policy Program and received a US DoT University Transportation Center Fellowship. He has worked with the Observer Research Foundation, where he led an initiative to restructure the Indian Home Ministry in the wake of the 2008 terrorist attacks, and co-founded Banaa.org, a university scholarship program for Sudanese refugees. A proud New York City native, Neil speaks Spanish, Hindi/Urdu, and Arabic, and plays guitar, sitar, and oud in an Indo-Latin funk band called Salsa Masala.

Stina Hamlin is a veteran member of the Producer’s Guild of America (PGA) and committee member of the Women’s Impact Network, has produced non-fiction, lifestyle television for twenty years.  Producing credits include Production Executive and Post Supervisor for multiple Scripps Networks and Discovery television series.

She transitioned from working in commercials to Senior Producer at post production facility, DuArt, and now is the Director of Post Production at East Coast Digital.  Under the New Media division she launched at ECD, she has been post producing the in-app videos for the Unicef Kid Power Band over the past year and is currently in post-production for a 360 documentary filmed in Mozambique, Africa for the U.S. Fund for Unicef.

Stina’s life-long enthusiasm for the arts, documentaries, and technology has evolved into a passion for producing cinematic virtual reality and 360 storytelling.  Her first virtual reality project, “Cardboard City,” was winner of the Samsung Gear Indie Milk VR contest in January 2016 and premiered at Sundance on the MilkVR platform.  “Cardboard City” then evolved into an interactive documentary featuring a blend of makers’ space, augmented reality, and virtual reality that premiered at New York Film Festival’s Convergence in October 2016.

A former professional dancer, she was driven to direct a series of 360 dance pieces by choreographer, Jonathan Lee, one of which recently won the grand prize in the #causes category for the Samsung Creators Awards, entitled “Say Our Name.”  Stina is currently working on the sequel to “Cardboard City,” “Boxed Out,” which has live action, stop motion, and interactivity, “Paper Doll Origami” a room scale interactive VR installation, as well as content for USA Today’s “VRtually There” series with her production company, State Media.